Searching For Color and Sculpture

Today was all about the drive.  Our goal was to take scenic byways and back roads to seek out fall colors in New Hampshire.  So far, Tim and I have not seen a lot of color.  Perhaps we are too early, the rains from Hurricanes Irene and Ophelia have muted the color or global warming is taking its toll.  For whatever reason, we’re seeing less color, especially fewer bright colors, than I remember seeing on previous visits.  Today that would change.

I was a bit nervous about traffic when we started out this weekend.  It is Columbus Day weekend, the busiest weekend of the year in New England, and here we are.  We headed for the Kancamagus Highway, one of the most heavily traveled roads in New Hampshire in the fall and hoped for the best.

We were pleasantly surprised as we entered the east end of the highway.  Most of the traffic seemed to be heading to the shopping outlets in North Conway.  As we climbed in elevation, the colors did intensify, and I was finally able to show Tim the beautiful New England fall that I love.  Our timing was perfect, since we encountered an endless line of traffic trying to turn onto the highway as we were departing. 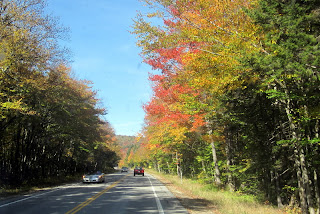 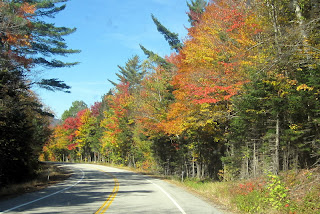 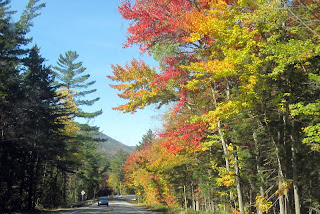 ﻿ ﻿We continued our drive on back roads through New Hampshire and enjoyed the views.  A lunch stop beside the road gave Kitty an opportunity to climb fences and walk around pumpkins larger than she is.  At our stop there was a group of pumpkins for sale.  They were priced according to size, with a box in which to place the money sitting on a sawhorse.  There was even money in the box.  As a former resident of Miami, I continue to be amazed at how trusting the people in New England can be.
﻿
﻿﻿

We finally made it to the Saint-Gaudens National Historic Site in Cornish, New Hampshire, despite Lucy, our harebrained GPS unit, who sent us there via five miles of dirt roads.  The site preserves and interprets the home, gardens and studios of Augustus Saint-Gaudens, one of America’s greatest sculptors.  He is perhaps best known for his public monuments, including the Sherman Monument in Central Park in New York, the Standing Lincoln in Chicago and the Shaw Memorial in Boston.
﻿ ﻿This property was Saint-Gaudens’ summer home in the late nineteenth century and his permanent home from 1900 to 1907.  It’s a fascinating site, particularly since so many of his works are on display here.  We couldn’t have had a more perfect day to explore the grounds.
﻿
﻿﻿ ﻿﻿ ﻿
Posted by Sarah at 8:00 PM

Road Trip Ramble is the chronicle of a nine-month journey with our cat throughout the United States. Traveling in a Free Spirit, a Class B motorhome from Leisure Travel Vans, we followed back roads and scenic byways as we visited national parks, museums, historic sites, charming small towns and any other place that struck our fancy. We're back home now, but you can still come along for the ride.